By S August 13, 2011
If I should start properly writing (including reviews) about books, which book should I start with? I thought it would be a tough hill to climb. That is until I saw the Bhagavad Gita. Or rather the few different commentaries of the Gita that I possess and I was no more bothered about finding a "first book" to write about.

I have not read the Gita in full yet. Hope to do it some day. Gita is for a lifetime study. It cannot be read and imbibed completely in one stretch. Many of the ideas illustrated in the Gita can be understood only if you have the relevant experiences, maturity, as well as the ability to process those thoughts. 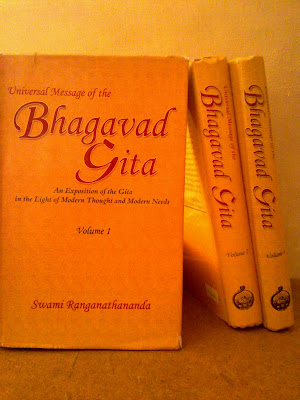 The exact version of the Gita that I want to mark my beginning - auspiciously - is the Universal Message of the Bhagavad Gita - An Exposition of the Gita in the Light of Modern Thoughts and Modern Needs. It was transcribed and compiled from Swami Ranganathananda's "series of Sunday discourses, from 1988 to 1990, at the 1200-capacity Vivekananda Hall of the Ramakrishna Math, Hyderabad..."

The commentary is spread over three volumes. This was the first commentary of the Gita that I bought. I was then a graduate student at the Ramakrishna Mission Vivekananda College, Chennai. I was interested in studying the Hindu scriptures and the most easily approachable text was the Bhagavad Gita.

Some close friends knew of my interest and suggested a few important commentaries. One of them was this. And it so happened that around this time Swami Ranganathananda passed away at the ripe age of 96. Tributes flowed and as I came to know more about him, I decided to buy a copy of the Universal Message of the Gita.

When I traveled to Bengaluru for post-graduate study, the Universal Message of the Gita accompanied me. My solitude was spent immersed in the ideas that these volumes revealed. In addition to the Gita being the best philosophical work ever composed, the personality who unveiled it was himself an astonishing individual. The fact that he was already 30 years old when the second world war started was fascinating. As someone who had lived through two world wars, Independence, partition and so many significant incidents of history, his experience spanned many generations. The might of those experiences and the wisdom received through them, Swami Ranganathananda promptly passes on to us through these volumes.

I was half way through the second volume when I finished my studies and returned home. I have since then bought four other commentaries, though I am yet to completely read through even one.