My New Love - The Learning Continues

Like that coffee, freshly brewed in the morning; the rain that pours at night, leaving the wet earth of dawn as the only evidence of her mysterious visits; Sunday mornings; the lights of the city on a weekend evening; an early morning train ride on a relatively empty MRTS; my Amar Chitra Katha collection; walking through the streets of Thirumylapuri - or Mylapore - to visit Kabali; an evening turning to night on the Bessy Beach - and the list goes on.

I now have another addition to this endless list of loves. She was selected after a lot of thought and discussion.


She is a Royal Enfield Himalayan - all of 411cc, a good amount of power and performance at my call, with just a twist of the throttle! The automotive forums are abuzz with a common theme - niggles and issues with the bike, as well as with Royal Enfield in general. However, there are an equal number of happy owners, who enjoy the bike as those with issues continue their complaints. I too have had some issues with the bike - high heat, hard gear shift, most of which were resolved after the first service.

While planning for the purchase of the bike, I also planned and purchased most of the safety gear - a good ECE/DOT certified helmet (from MT Helmets), a touring, mesh jacket with Knox certified armor (Aspida), gloves (Scoyco), knee protectors (Cramster). Still some more to go, such as a crash guard around the engine, a set of auxiliary lights and lots of reflective stickers.

I have had two small falls while the bike was immobile - due to the weight of the bike - and a near major fall and slide on the Chennai-Bangalore highway (yesterday). Thanks to all the safety gear, I was able to walkaway from the crash and fall, with just wrist pain and nothing else. She bore the brunt of the fall, with a bent handle bar and some other stuff, but which I was able to get fixed.

She never fails to put a smile on my face, every time I ride her! And riding her, is a lot of learning. Like the highway rides of the past two days. Definitely teaches a lot of patience, and the wisdom to avoid dangerous situations.

Unmistakably, the joy she gives while I rode through those rustic roads (between KGF and Kuppam) - early morning, beautiful views and good roads; those moments create the best memories when I think back!

Ending with me indulging in a bit of narcissism - posting a picture of myself with the bike, somewhere on a beach on ECR. 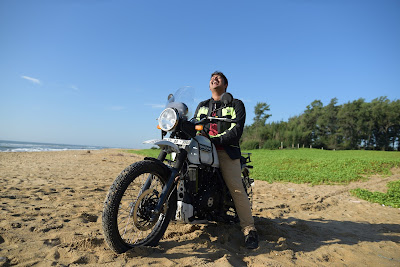