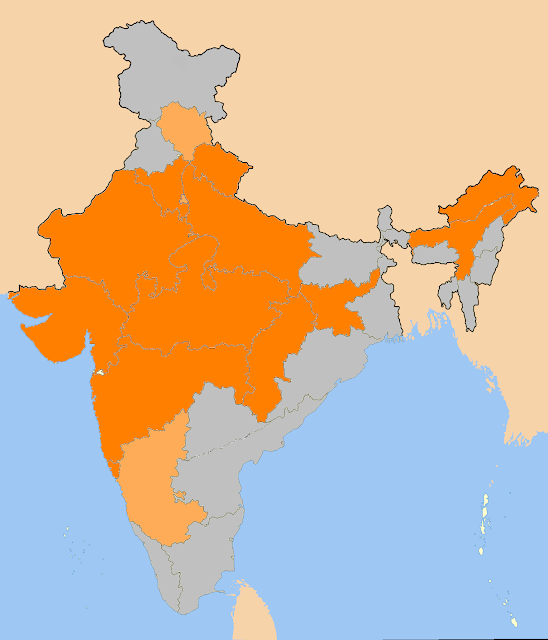 Importance of this huge UP mandate, and the ways in which it will spill over, beyond today's results.


BJP & NDA gain majority in both houses of the parliament. They are also in power, in about a dozen state assemblies. This will impact two issues.

Narendra Modi and Amit Shah can comfortably appoint the person of their choice to be the next President.In line with this, they can - the must - use the additional support to appoint the right people in key institutions - and I hope they go into serious detail, not just stopping with Governors and Chief Justices. We are in a dire need of replacement for those old fossil remnants of a foregone socialist era. The institutions needs a thorough spring cleaning, and dynamic, vibrant and dharmic personalities should be appointed to key positions.

This is so, so crucial because all we have are self-important, dynasty loyalists, sitting in seats of influence, beginning from the supreme court. to the peons in village offices. They just sit and pass comments on the work of the Modi government, instead of doing their jobs for which they are paid a substantial salary and allowed endless perks. The NDA governments at the center and in states, must just appoint people who will do the job they are supposed to do, to the roles they deserve. Like they did in the RBI.

This also means, Modi might administer a few more bitter pills in the near term, at least till the end of 2017. Better now, than later, because within a year, the next Lok Sabha election will be looming large around the corner. In turn, that means, we can expect a lot of sweet deals in 2018 and definitely in 2019. However, most of these measures turn out to be for the good of the people in the long term.


Due to lack of numbers in the Upper House of the parliament, as well as the opposition from several large states, where NDA is not in power, a lot of important reforms have been stuck, beginning with the fast track implementation of GST, land reforms, labor reforms, enemy property act, benami act and so on. Now all of these will be pushed through the Rajya Sabha.

A Big Fat Lesson to the Opposition


Their brand of politics cannot be sold anymore. Either they will change their principles, or they will vanish from the political scene. This will pave the way for a new kind of opposition, which will critique BJP constructively, and compete with them on an equal footing. I am personally excited to wait and watch the growth of the party-personalities, who will occupy this new credible opposition space, that the people are furiously vacuuming clean.

UP elections specifically portend the swansong of the likes Mayawati and her Bahujan Samaj Party(BSP). BSP was wiped out from the Lok Sabha in 2014. Now it has been rendered electorally insignificant in the UP state assembly. Congress, while being trounced along with its alliance partner, the Samajwadi Party, in UP, is holding on to relevance in the smaller states of Punjab, Manipur and Goa. It still means that while Cong party loyalists might be blind to the lack of credible leadership in their party, the people are quite well aware of the corrupt nature of the Cong party.

To conclude - BJP, under Amitbhai Shah, is now able to move its huge organizational machinery, to capture the mindspace of voters in hitherto unreachable states, such as Arunachal Pradesh and Manipur. It could mean that in the future, there is every chance of the BJP making deep rooted in roads in states like Kerala and Tamil Nadu, if the party works hard enough.