Booktalk - The Secret of the Nagas 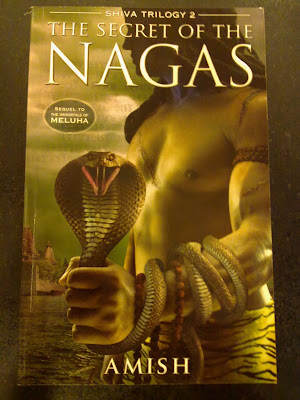 The Secret of the Nagas is the part two of the Shiva Trilogy and continues exactly where the first book The Immortals of Meluha stops.

The book begins with a small, but intense skirmish between the mysterious Naga warrior and the Shiva-Sati couple. The couple underestimate the Naga and end up injured. But what puzzles them is the apparent lack of viciousness on part of the Naga, who, although he had many chances to kill either of them, leaves Shiva and Sati alive with only minor wounds. From this point the story thrillingly unfolds further.

A lot of new characters are introduced, and identities and backgrounds of quite a few old characters are revealed - many of them quite shocking. But nothing is as shocking as the revelation on the very last page of the book!

Like in the first part, in this part too, Amish, through his protagonist, continues to raise the question - if something is apparently evil, is it actually evil? What is good and what is evil? Through Shiva's discussions with the Vasudev Pandits, Amish delves into this moral dilemma repeatedly, with each encounter taking it deeper.

What is apparently evil may have a background and many contributing factors that actually make it good. It is important since we frequently assume something to only be either black or white; but later learn, often through harsh experiences that nothing is absolutely so. Everyone and everything has a reason to exist and a role to play. They can be dealt with only as various shades of grey.

It is this constant discussion - what is good and evil? why must evil necessarily be a person? And so on, which give the book a meaning and an intensity, and make it more than just an ordinary, fast-paced, page turner.

As you read through the book, if you think you can predict the plot, you will be seriously mistaken. Amish has taken inspiration from many incidents recorded in our itihasa-puranas, but his ingenuity in using them in the story makes it an exciting and fresh read. In the light of his sticking to a great extent with the attributes of the original personalities of whom his characters are namesakes, this seems to be a daunting task, but Amish has accomplished it successfully.

The book does have its downturns. Too many people are "ridiculously muscled", as we are repeatedly told. Some areas also seem to slow down the pace a bit. Again, like in the first part, the book stops at a crucial scene and leaves the reader pining for the next part, a good auto-marketing gimmic - after all, the book has to sell at the end of the day.

Amish has set a standard in his first book and matches it in his second book. What is in store in the last book - The Oath of the Vayuputras, that he is yet to write?